For my blog readers, my son, Caleb and I are finally on our mission trip in Santiago, DR. We arrived in the middle of the night to the Mission of Hope (MOH) Santiago Campus Sunday morning, June 2. I’ll be blogging about this experience while I can on the trip and for the next several weeks. I’ve shared pictures on my Facebook page, but I really want to unpack this experience through blogging. Update: This is the only blog post I’ve managed to type thus far. I intended to post more, but I think several things are at play: I’ve been more tired than usual, been getting settled into my normal routine, and still mentally and spiritually processing this trip.

This particular post is focused on the food. These almond butter packets I brought have saved me to a point.

At the time that I posted this, I only had one left. So what have we been eating? Well, we’ve been roughing it, for sure, at least Caleb and I think so. MOH has many interns and most of them appear 19-25ish. They’re pretty thin and may not mind the food. Our mission group has a range of ages. I was worried about what the food would entail because I eat pretty healthy at home. We were allowed to bring our own snacks, so I brought a bunch of healthy items: Kashi cereal & cereal bars, kind bars, pistachios, organic applesauce, dried fruits, green energy packets & electrolytes, organic soups, peanut butter packets. I only ate a fraction of what I brought (electrolytes, pistachios, dried fruits, peanut butter packets) and ended up donating the remainder to the MOH interns and staff.

As a church group, we brought on the flight with us some items from the states since it would be cheaper: Peanut butter, jelly, cereal, powdered milk, condiments, etc. For every meal, there have been ample carbs. For example: white bread for sandwiches & macaroni salad. Dinner usually entailed rice and more bread. Neither Caleb nor I are particularly like sandwiches, but we’ve been making it work. Caleb was really hungry on the second or third day when he realized we would be eating the same foods and he said, “I’m going to have to make this work”. He made a macaroni salad SANDWICH!

Dinners were made by Haitian and Dominican cooks.

Beef stew with rice/beans and cake 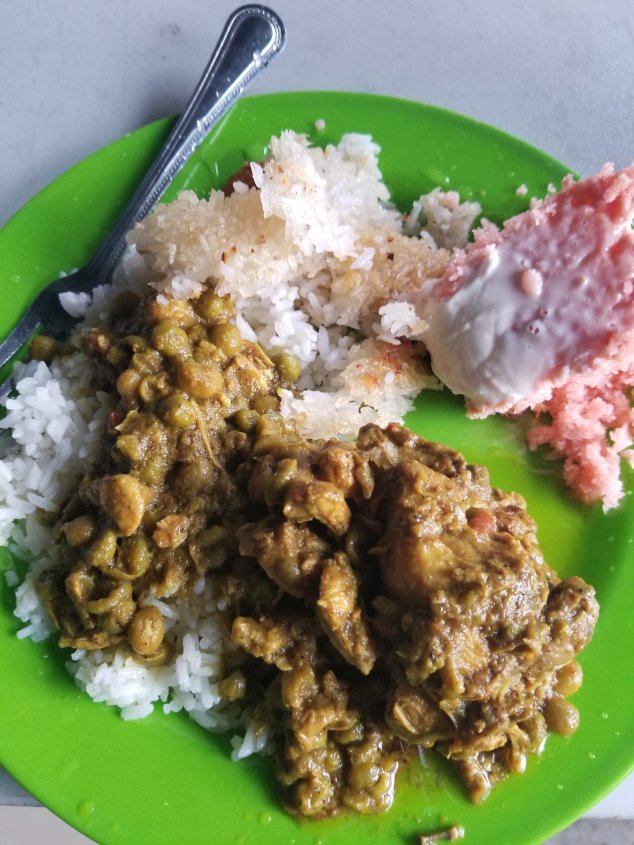 Stewed chicken and peas with not just white rice, but also graten, which is a delicacy! Strawberry cake on the side.

Each night featured a different meal…all tasty. The pictures do not give the food justice. Although he acknowledged it was good, Caleb wasn’t too impressed because I make Haitian food at home along with many other types of food. I think he thought he was going to eat something he never had previously. I’m thankful that my mom taught me how to cook, even though I vividly remember not wanting to learn. I get to share that part of my heritage with my family.

One of the Haitian cooks has been working with MOH Haiti for a while. Her brother was sponsored by the organizer at our church for some years, then he was sponsored to attend college by someone else. He’s since graduated college. I introduced myself to her as she was serving our food, but hope to have a good conversation with her before I leave. Update: I didn’t get a chance to have a conversation with her with all of our activities. I hope we cross paths again one day….perhaps on another mission trip?

I didn’t eat much breakfast. I embraced my almond butter sandwiches for lunch, but I’ve especially looked forward to dinner. I’m surprised we’ve had fresh salads most evenings. I was told in Haiti there is rarely fresh greens so this is a treat. We’ve also had cake the last 2 nights. Our team lead managed to get us some avocados. They were huge. We also had mangos as there were several mango trees on the property where we stayed. It’s not everyday that I eat fruit that falls off a tree. I do remember growing up in Chicago, my aunt and uncle had a pear tree on their property. The pears never seemed to be ripe, even after they had fallen.

This trip isn’t about me having all the comfortable, familiar foods I want when I want it. It’s about sacrifice and service, so I can deal for a week. Speaking of service, each group was assigned dish duty, which we participated in as a group. Also, Friday was beach day and we got to eat some local food as noted in the cover photo: fried red snapper, rice, beans and plantains (not pictured). It was so good! My impression is that Dominican food is just about the same as Haitian food. Rice and beans, plantains, and protein. More stories to come from this experience.